Audrey Riley trained at the Guildhall School of Music, London with Leonard Stehn. As an arranger and improvising cellist she has recorded for over two decades with numerous groups including Dave Matthews and The Smashing Pumpkins, giving her the opportunity to conduct both the Seattle and Chicago Symphony Orchestras.

With her own orchestra she has contributed arrangements to countless albums. Recent years have seen Coldplay's 'A Rush Of Blood To The Head' and 'XNY', The Foo Fighter's 'Echoes And Silence', three albums for Muse including the most recent 'The Resistance' , a number of albums for Feeder, as well as Moloko, Amy MacDonald, Brendan Benson, James Blunt and Spandau Ballet. Three of her arrangements have featured on Grammy award winning singles. Work with Muse and the musicians of La Scala, Milan have led her to establish a relationship with the orchestra there. She also recently completed her first film score, 'The Third Letter'.

Since 1989 she has been a member of contemporary music group Icebreaker, giving concerts, making recordings, and performing with dance companies: Royal Ballet, Scottish Ballet and Random Dance. Most recently Icebreaker have recorded Philip Glass' Music In Changing Parts and performed the score of Brian Eno's Apollo together with the film by Al Reinart at the Science Museum, and also at the Brighton Festival this year, performing with Brian Eno, where they were given the award for Best Musical Performance.

As a cellist she tours with the Merce Cunningham Dance Company in solos by John Cage and Gavin Bryars. As a soloist she has had numerous new works written for her, two by Gavin Bryars 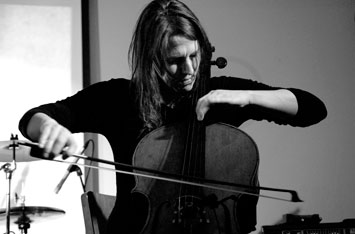 in the past couple of years which are about to be recorded. She performs regularly with James Woodrow in recitals of music for cello and classical guitar and is a member of Cathal Coughlan's Grand Necropolitan Quartet.

In 2001 she embarked on A Change Of Light, her own project. All the composers and performers in this project are linked to Audrey through other collaborations in various performances and recordings.