Trained at the Royal Northern College of Music, Manchester, James is a member of the Gavin Bryars Ensemble, Icebreaker, Lontano and Cathal Coughlan's Grand Necropolitan Quartet. He has given many performances as soloist and ensemble player with the London Chamber Symphony, Birmingham Contemporary Music Group, London Sinfonietta, the BBC Singers and The New London Chamber Choir. He plays in a number of jazz ensembles, including his own quartet Candy Time, with whom he has just recorded a second CD.

James has worked with a number of contemporary dance companies, including Richard Alston, Merce Cunningham, London Contemporary Dance, Rambert, Phoenix Dance Company, Siobhan Davies and Shobana Jeyasingh with whom he will shortly be touring in a new work written for him by Michael Nyman. 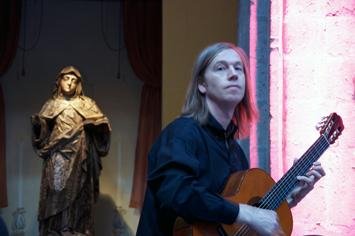 guitarist on a new film score by Lalo Schffrin; and a concerto performance for Icebreaker with The American Composers Orchestra at the Carnegie Hall.